The Cambodian calendar is littered with holidays and its Water Festival – or Bon Oum Touk – is one of the largest. For three days, locals flock from across the country to the capital of Phnom Penh to watch the colourful boat races take place along the Tonle Sap River.

November is an important month in Cambodia. Not only does it mark the end of the monsoon season, when the heavy rains abate leaving way for the dry season ahead, it brings cooler temperatures, high water levels and ushers in the fishing season. What better way to celebrate than a festival? And that’s exactly what they do here in Cambodia with the annual Bon Om Touk – or Water and Moon Festival. 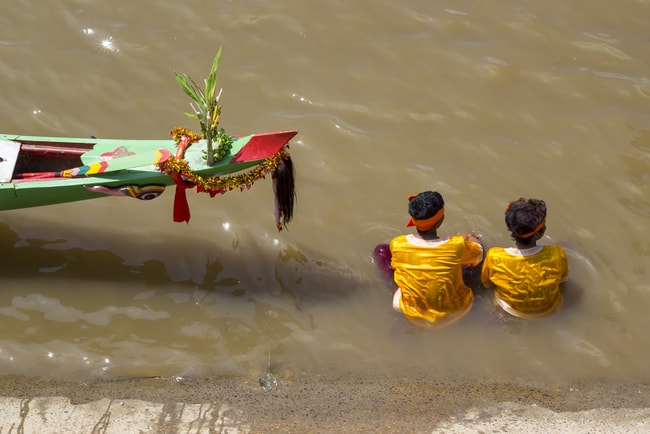 What Water Festival is All About

Following the Buddhist calendar, the event falls on the full moon of the month of Kadeuk (the eleventh month of the solar calendar). The full moon then is known as the Harvest Moon and is believed to deliver a bountiful rice crop – another reason to party, with the bright lights of the full moon illuminating the evening’s celebrations.

And if this isn’t reason enough to party, then the festival also marks the reversal of the Tonle Sap’s current, which feeds into the Mekong River in Phnom Penh, and is the only river in the world to boast this unique trait.

The Water Festival has been celebrated in Cambodia for centuries, with evidence found on etchings at Bayon and Banteay Chhmar temple walls. With its roots steeped in Angkorian times, the kings who ruled sent many naval forces to battle to protect the empire, with the boat races representing the force of the Navy and the victories they achieved. 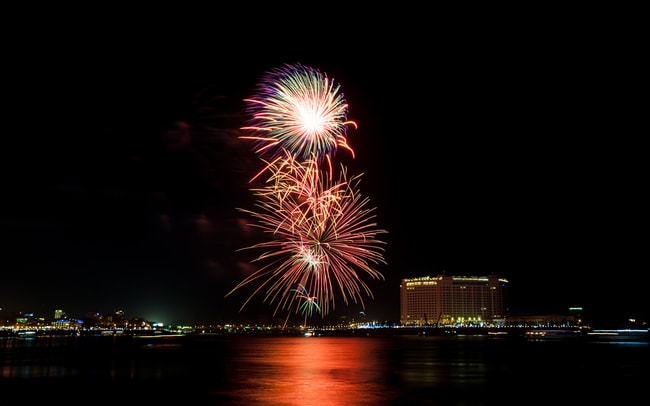 This tradition has carried on until today – although the festival was dogged with trouble when in 2010 a stampede killed 347 people and injured a further 755, causing it to be cancelled for the next three years.

Villages and communities across the country spend the year sprucing up their boat – a long thin, wooden boat that can hold up to 100 people – and practising their racing skills on nearby waters before heading to Phnom Penh to battle against other boats on the water.

What to Expect During Water Festival

Unlike Khmer New Year when the capital empties, during Water Festival people from across the country head to Phnom Penh, with an additional two million people crammed onto the streets for the races, fireworks and other celebrations that take over the city.

And on top of the boat races, there are several ceremonies that take place during Bon Om Touk to thank both the land and water for providing life.

Bandaet Pratip starts at 7pm and sees a parade of illuminated boats drift down the Tonle Sap river. Traditionally, Cambodians would make their own and release them on water near their homes, believing the boats take away any bad energy with them. This is still practiced in some areas but is not as popular as it was previously.

The Phnom Penh version sees a string of pretty illuminated floats presented by the various government ministries and organisations. This is followed by a spectacular fireworks display. 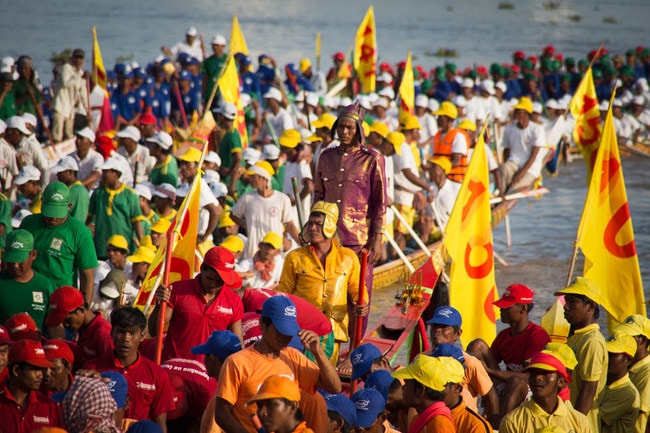 Sampeah Preah Khae takes place on the last day of the festival and is also known as the moon salutation. Cambodians will set up an array of offerings in the form of food, drink and incense in front of their homes at night before gathering at pagodas at midnight for the third ceremony, Ak Ambok.

Ak Ambok is rice fried in the husk before being pounded by a giant pestle. The husks are then removed and the rice is mixed with coconut and banana, and eaten when the clock strikes 12.

Get Involved with Water Festival

If you happen to be in Phnom Penh between November 2 and 4, then head to Sisowath Quay and join the crowds to watch this colourful event captivate the country.

Expect hotels to be busy during this period so book ahead – especially if you want to check in to one of the hotel’s on the riverside, a prime location for the festival. And if you want to secure a top spot for viewing the races then reserving a table is advisable.

Popular bars along Phnom Penh’s riverfront include Le Moon’s rooftop terrace, offering perfect views across the Tonle Sap and Mekong confluence, and the end of the race. FCC and The Quay Boutique Hotel’s rooftop bars are other great places to catch the action in the form of the races, fireworks and looking down on the crowds milling about below.

If crowds don’t send shivers up your spine, then hit the streets and try and catch a glimpse of the boats from Sisowath Quay, or head across the Japanese bridge to the quieter riverfront on Chroy Changva peninsular and watch the races from there.

Siem Reap also holds smaller races on Siem Reap River for those in Temple Town during the celebration. Again, head to the riverside to join in the festivities.